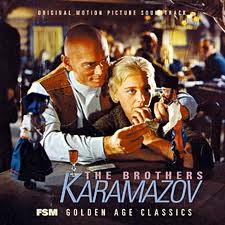 Dmitry Karamazov is the oldest of the three Karamazov brothers in Dostoevsky's novel by the same name.  In the preface, we are told that the youngest brother, Alyosha, is the hero in the series of novels of which The Karamazov Brothers was meant to be the first.  Unfortunately, it was the only novel in the intended series, Dostoevsky dying in 1881 at age 60, one year after it's completion.  In this first novel, Alyosha and his spiritual quest dominates the first half of the novel, but the second half deals almost completely with Dmitry and the consequences of the crime he is accused of committing.
Dmitry is a mess.  He is madly in love with a woman whom his father is trying to seduce.  He blows on riotous living any money he receives.  He doesn't keep promises.  He has a violent temper.  And yet, when Dmitry thinks about himself and when he must describe himself to others, Dmitry thinks he is an honourable man.  He loves God and he knows that God loves him--and will forgive him.  Dmitry conceives himself as a good and honourable man even though he admits that he does things that are neither  good nor honourable.
This is my fourth time through The Karamazov Brothers.  I have read it every decade since my twenties.  The first time I read it, it made almost no sense to me.  I don't think I even finished it.  But the second and third times, the novel began to make sense.  During my earlier reads, I interpreted Dmitry as the perfect example of a self-deceived man.  Here is a man who can see clearly the evil things he does and yet still considers himself a good man.
However, I am reading Dmitry differently this time through.  Yes, there are plenty of self-deceived people in the world who "call evil good and good evil" (c.f. Isaiah 5:20),  but I don't think that is what is happening with Dmitry.  Dmitry calls evil, evil; but he insists that within him there is also good, a good that he wants to manifest, but somehow is unable to manifest very often or very well.
Over the past several years, I have been able to develop a relationship with someone who has bi-polar disorder.  As I was reading the Karamazov Brothers this time, I began to realize that Dmitri is bi-polar.  I won't bore you with the details, but I double checked the symptoms of bi-polar disorder at the National Centre for Biotechnology Information website and every last one of the symptoms listed for severe bi-polar disorder fits Dmitri exactly.
Now my point is not that Dostoevsky's insight into psychology is amazing--although it is amazing.  My point is that I am generally very quick to apply to others criteria that I imagine I apply to myself.  I am very hard on others for their inconsistencies, but almost completely blind to my own.  Dmitri is not self-decieved.  Dmitri is the only one, except perhaps for Starets Zosima, Aloysha, and eventually his girl friend Grushenka, who sees himself somewhat clearly.  This is his torment: he is a good, honourable man who is unable to be good or honourable much of the time.  That is, like the epileptic, his assumed half-brother Smerdyakov, Dmitry also has a mental disorder that he cannot control.  However, unlike his half brother, Dmitry does not seek to use his disorder as a cover for evil.  Rather Dmitri genuinely regrets and repents of evil he has done.
And I think repentance, not necessarily performance, is the key.
It is impossible to know the depths of another's suffering.  We cannot know all of the past wounds, diseases, chemical imbalances, or demonic torment that may influence the behaviour of others.  In fact, I will go so far as to say that very few people really know the depths of their own soul and why they do what they don't really want to do and can't seem to consistently do what they want to do.
Sure, repentance means changing your mind, turning around, taking a new path.  And repentance, to be repentance at all, must be sincere, from the heart, and with a good intention.  Nevertheless, just as good intention cannot stop an epileptic seizure, sometimes in all of us and perhaps almost all of the time in some of us, genuine, sincere repentance does not keep us from falling into the same sinful behaviour again.
In the Ladder of Divine Ascent and in other early Christian desert literature, sin is occasionally likened to epilepsy.  One monk, it is recorded in the Ladder, finds his salvation by bowing before everyone who enters the monastery and saying, "Forgive me.  I am an epileptic."  When it comes to the battle against sin, both in ourselves and in those around us, I think it is helpful to say quietly to ourselves (not out loud!), "I forgive you because I know you are a spiritual epileptic.  And please forgive me too, for I am an epileptic.
Posted by Fr. Michael at 5:00 pm

I am also rereading the Karamazov Brothers again, I should say listening to it. A friend directed me to Librivox where you can listen to a selection of books. I had trouble staying focussed when I was reading it the first time. I got through the book the first time because I wanted to say that I had read it but I missed a lot. I strongly identified with all the "good" characteristics in each character and saw the rest as a lot of chaos.I have learned a couple of things about myself. I can pay attention much better when I am hearing the book rather than reading it. I look at the chaos in the book now and see myself. I sincerely hope this means progress but it certainly means a shift in my self perception. It feels more truthful. I am curious now to reread this mirrior of humanity again in a few years and see what I learn about myself.