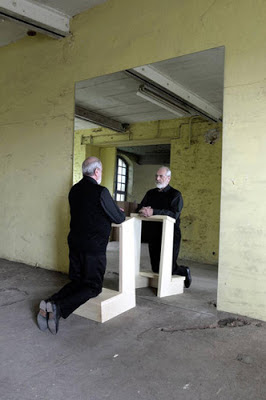 We will not be punished or condemned in the age to be because we have sinned, since we were given a mutable and unstable nature.  But we will be punished if, after sinning, we did not repent and turn from our evil ways to the Lord; for we have been given the power to repent, as well as the time in which to do so.  Only through repentance shall we receive God's mercy, and not its opposite, his passionate anger.  Not that God is angry with us; he is angry with evil.  Indeed, the Divine is beyond passion and vengefulness, though we speak of it as reflecting, like a mirror, our actions and dispositions, giving to each of us whatever we deserve.

St. Theogonostos, "On the Practice of the Virtues" sec. 47, Philokalia vol. 2

This little passage from the sayings of St. Theogonostos points out some of the tensions in an Orthodox Christian understanding of judgement in the age to come.

Of importance is the fact that there is punishment or judgement, but it is not because we have sinned; rather it is because we have not repented.  And it should be noted that we may indeed speak of God's "passionate anger" with evil, never with any creature, but only with the perversion, which is what evil is: the twisting of what is good.  But even then, God is beyond passion.  When we speak of God's anger or of God's vengefulness, we are only reflecting ourselves.  Thus, one Orthodox way of thinking about the judgement of the age to come is to face ourselves as judge, or rather to see God as reflecting in a mirror our actions and dispositions, thus each of us receiving what we have given.

Such a view of the judgement of the age to come certainly rings true in the light of many of the sayings of Jesus: the parable of the rich man and Lazarus comes immediately to mind.  Sayings such as, "give and it will be given unto you" and "with the same measure you give it will be rendered unto you" and "do unto others as you would have them do unto you" all these and similar words lend a certain ring of truth to St. Theogonostos' words.

This may be one of the reasons why Orthodox Church fathers and mothers stress so often the importance of not judging others (after all, it was Jesus who said, "Judge not, lest you be judged," etc.).  Instead of judging others, which generally leads to some sort of condemnation of those we judge, it is better to seek and offer mercy.  We should look at everyone as we would want God to look at us on the Last Day.  It may indeed be that how we look at others today will be the mirror in which we will see God's judgement reflecting on us on the Last Day.