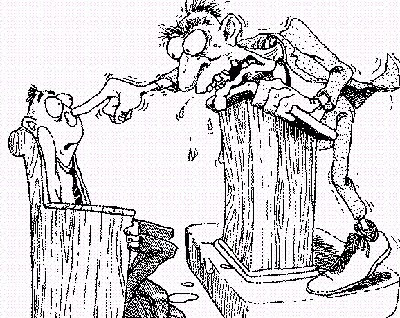 He who is pure of soul and chaste in life always speaks the words of the Spirit discreetly.... But when a mans' heart is crushed by the passions, his tongue is moved by them; and even though he speak of spiritual matters, yet he discourses passionately, to the end that he might be victorious....
St. Isaac the Syrian

In my teens, I heard a story at a Pentecostal revival meeting.  The preacher related that in a dream--or perhaps he was citing someone else's dream--he was at the back of a large crowd listening to a preacher.  Although everything the preacher said was from the Bible, something was not right.  Slowly he made his way to the front of the crowd, listening for some mistake in the preacher's words to confirm the discomfort he felt in his heart, but he heard no error.  Finally he made it to the front of the crowd and saw that it was the devil himself preaching.  Shocked, the man said to the devil, why is it that you are speaking the truth? The devil answered him with a grin, don't you know, the truth is the strongest weapon a liar has to wound and deceive others?

This story has always stayed with me.

St. Isaac the Syrian says something similar.  Even when speaking of spiritual matters, a passionate person, "a person whose heart is crushed by the passions," speaks moved by those passions.  For the passionate person, truth is about being right, about being victorious, about winning.  This is contrasted with the person who is pure and chaste in life, someone not driven by passions.  Such a person is discreet, careful, and quiet when he or she speaks "the words of the Spirit."

Many in the Church have pointed out that a true word is only effective as truth when it is spoken by a true person in a true way at a true time.  Or as the King James version of the Proverbs puts it, "A word spoken in due season, how good it is" or "A word fitly spoken is like apples of gold in pitchers of silver."  To fittingly speak on spiritual matters, one cannot be secretly motivated by either a fear of being wrong or a need to be right.  To speak the words of the Spirit, to speak fitting words, they must be in due season.

But how do you know when it is a due season?  Generally speaking, most of us don't.  This is why one should always speak the words of the Spirit gently, carefully, discreetly.

Many years ago, when my wife and I would visit Mother Victoria occasionally (when we lived in Southern California), I was often amazed by how piercing, how accurate, and how powerful the words she spoke were.  But what amazed me even more was that as soon as Mother Victoria encountered any resistance from the person she was speaking with, she would always stop speaking--sometimes merely adding, "well, maybe you're right."  This was not a show on her part.  If you wanted to know what Mother Victoria thought, you had to listen with an open heart.  She was not at all certain that she was right, and she definitely was not interested in winning an argument.  When asked, she merely and discreetly shared what she thought, what the Spirit had taught her, the wisdom of a woman who had spent her whole life praying and serving others.

God help me to be more like Mother Victoria when I speak.

One of the huge struggles of my life is not to let the passions sometimes raging in my heart, not to let these passions move my tongue.  My insecurities want to use truth as a weapon to attack others.  My fears want to hide behind true statements.  My lusts dance at the titillation of seeming to influence or even control others with high sounding but empty words gleaned from books.  God have mercy on me.

And yet, I have Mother Victoria and other godly examples to follow.  I have St. Isaac's advice and the advice of other saints to guide me.  By the prayers of St. Isaac and of all the Saints, may we all learn how to speak truth, discreetly.
Posted by Fr. Michael at 12:01 pm

How do we learn about spiritual things?

Much of academic instruction is based on a kind of dialogue between professors and students. Truth comes out of logical, reasoned debate.

Dear Nicholas,
Indeed, spiritual knowledge is a very different kind of knowledge from academic knowledge--not that they are completely incompatible. They are just very different. Spiritual knowledge is acquired through experience of God in one's heart. In the classic Orthodox model, this knowledge of God is guided by a wise spiritual father; for it must be guided because delusion is also near at hand when one begins to pay attention to God in one's heart. Nowadays, when there are very few true spiritual fathers, the best one can do is humbly to seek advice from whomever God brings into your life who proves helpful and to read reliable spiritual writers, the lives of saints and to pay attention to the teachings of the Church. However, in the end, it is still a matter of actual experience of God in the heart which one cannot make happen. It is a gift of Grace which one can only prepare oneself to receive and attend to when it comes, but only God gives.