Pray For Us, Annie 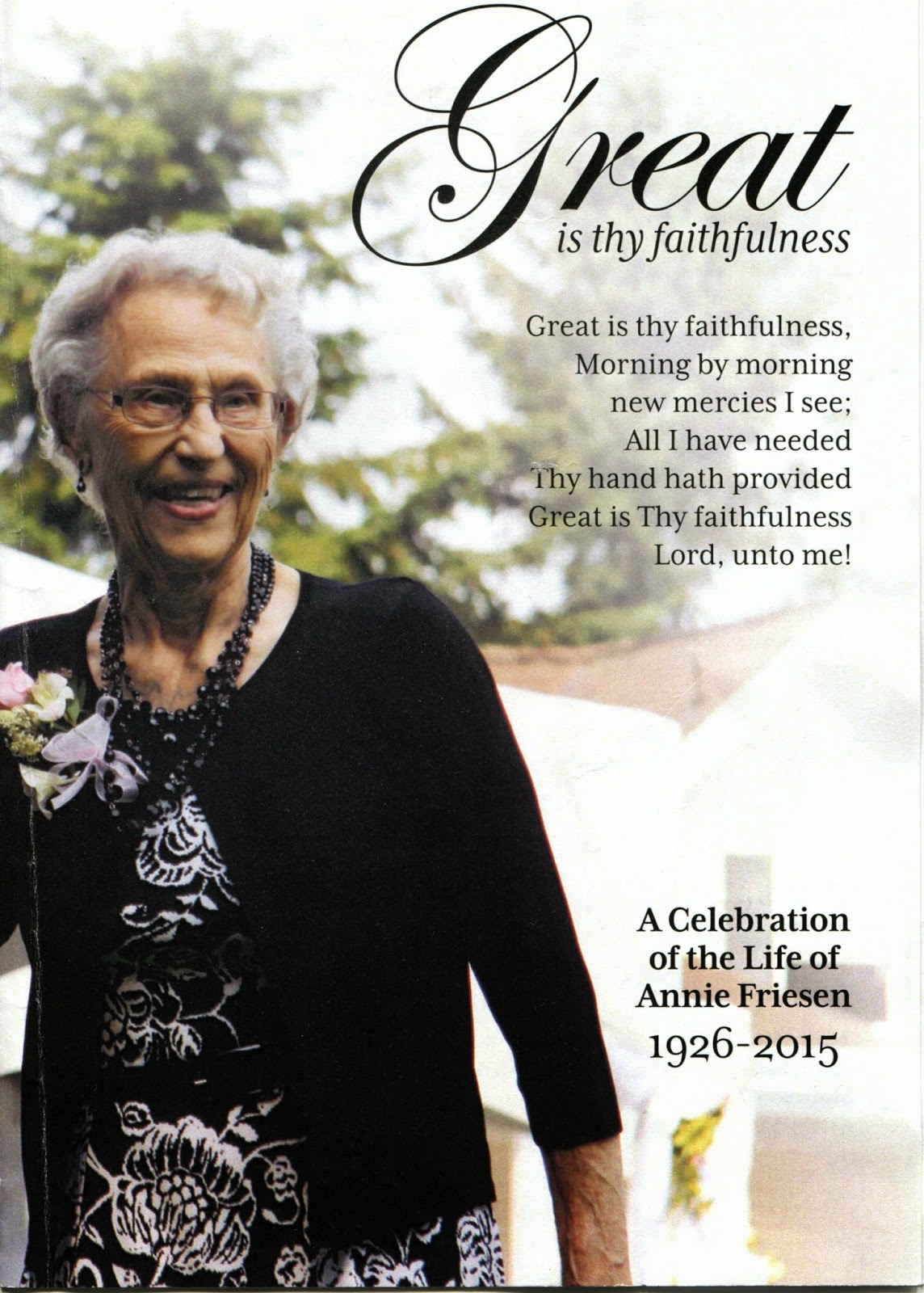 I went to a celebration of a life a couple of days ago.  It was at a Protestant church.  It was nothing like a funeral, and that’s too bad because I think Annie would have liked a funeral too. But as far as celebrations of a life go, this one was pretty good.  The hymns were prayerful and the speeches respectful.  But what was most amazing to me was Annie herself and what her children and grandchildren chose to remember about her.

I had only met Annie a couple of times. She is the grandmother of one of my parishioners. I really didn’t know Annie at all, but by the time her celebration of life was over, I knew her well enough. Here are some of the things that her children and grandchildren remembered about her.
Annie read her Bible and knew a lot of it by heart.  When she was eight years old, she memorized 500 verses in order to go to summer camp.  Annie loved God and always loved whomever she was around.  Her children used to bring friends and even strangers home and Annie would care for them, talk to them, feed them and help them as she was able.  One of the children remembered the time on a rainy Christmas Eve, coming home from Church that they stopped to pick up a hitch hiker.  And that hitch hiker became their guest at their family Christmas celebration over the next few days.

But the one story that seemed to me to draw the most striking picture of who this woman is took place the last few months of her life. At about ninety, Annie was getting very frail and forgetful and so had to be placed in a residential care hospital. What bothered Annie most about this was that she could no longer help anyone. She couldn’t cook. She couldn't clean. There was nothing helpful that she could do. Until one day she figured it out. She figured out what she could do to help people. You see despite her weakness, Annie was still pretty flexible and she could bend over and pick up things off the floor. Many of the patients in the facility where she lived were in wheel chairs or used walkers and could not pick things up off the floor. Annie had found her ministry.  Every day, Annie would wander around her facility, looking for people who needed help picking something off the floor. And this Annie did every day until she herself could no longer get out of bed.

Annie was not an Orthodox Christian—she was some sort of Mennonite, I guess. Nonetheless, when I told this story over the phone to my spiritual father—an old Orthodox hermit living in the mountains—do you know what he said? He said, “May the servant of God, Annie, pray for us.”

In Matthew Chapter 19, at the end of the chapter, Jesus tells his disciples that in the Regeneration, on the Last Day, that they will sit on twelve thrones judging the twelve tribes of Israel. From the context of the passage, it seems to me that what Jesus is saying is that they will not judge by making decisions about others, nor by determining anything. Rather, they will judge just by existing. How is that?  In verse 21 Jesus invites the rich young ruler to leave all and follow Jesus. He does not, but Peter points out that they (the 12) had. They had done it. They had left all and followed Jesus, and thus Jesus said they were the judges, they are the criterion, the standard. On the Day of Judgement, no one will be able to say that it was impossible to follow Christ completely for there will be twelve judges—all merely human, human beings who cooperated with the Grace of God that had been given them, human beings who did leave all and follow.

I wonder if on the Day of Judgement how many like Annie will be sitting on thrones with the Apostles. How many Annies are there who just did it, who just left all to follow God wherever they were, in whatever context they found themselves and with whatever shreds of the True Faith they had, how many Annies gave everything to God and were transformed by Him?

And what about us? We who have the True Faith, who worship the Undivided Trinity, who swim in the wealth of the Holy Orthodox Faith. Where will we stand on the Last Day?  How will we compare next to Annie? Maybe it is a good idea that we too, along with the holy monk in the mountains, ask Annie to pray to God for us.


Now that Great Lent has come, let’s not revel in the greatness of our struggle nor the wealth of our spiritual, liturgical and theological Tradition. Rather, let’s remember Annie: A women with very little of the Church’s wealth who devoted herself completely to what she did know of the Truth and was made like Christ as a result.
Posted by Fr. Michael at 11:17 pm