When Apples Are Sometimes Oranges 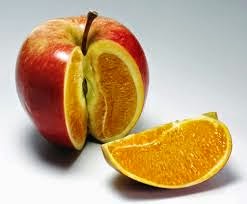 One of my big confusions during the first few years of my journey as an Orthodox Christian was caused by an assumption I had that words used by different Orthodox spiritual writers would refer to the same thing. There may be a philosophical name for this way of thinking about words and reality (other than ignorance), but I don’t know what it is. It took me a few years and abundant consternation to finally figure out that, for example, the words soul, or prayer, or nous (sometimes translated intellect) did not necessarily have the same meaning when used by St. Paul, the Desert Fathers, St. Gregory of Palamas or St. Theophan the Recluse. In fact, even within the writings of one Holy Father, sometimes words take on slightly different meanings in one context than they have in another. Figuring this out the hard way cost me several years of headache wondering why apples sometimes looked more like oranges.

St. Isaac the Syrian addresses this problem directly in homily twenty-three as he tries to address some misunderstandings about the nature of “spiritual prayer.”  For St. Isaac, “prayer” refers to an act of the human will (manifested in various forms, or what he calls “modes”) by which a person “give[s] his attention to God, and he yearns for and awaits mercy from Him.” The highest form of prayer for St. Isaac is what he calls “pure prayer,” that is, prayer without distraction—a state that St. Isaac points out is exceedingly rare, especially as a sustained experience.  Spiritual prayer, for St. Isaac is a state beyond pure prayer that is no longer prayer. It is no longer prayer because the human will is no longer leading or making the prayer happen, but rather the Spirit now leads and the will and mind now just go along for the ride. St. Isaac cites St. Paul’s experience in 2 Corinthians 12, “whether in the body or out of the body, I do not know” as an example of this spiritual prayer.

But then St. Isaac anticipates a question: If spiritual prayer is not prayer, why is it still called prayer? St. Isaac begins by explaining that “The Fathers were wont to call every good motion of the spiritual activity by the name of prayer.” Prayer, for the Fathers, is a general term that can refer to any motion (that means thought or action) that points one to God or by which one draws near to God. This is why you will often hear holy people say that almost anything can be prayer, if it directs your attention to God.  All sorts of activity, everything from a walk in the woods (even perhaps a walk around a golf course) to a midnight vigil, from the practice of inner silence to the building of houses for the needy, all of these in some ways and for some people can be called prayer, if indeed the motion (the thoughts and activities) direct one’s attention to God in a way that the person “yearns for [God] and awaits mercy from Him.”

But then St. Isaac goes on to point out that what is sometimes called spiritual prayer is other times or by other people called theoria, or knowledge, or noetic vision.  “Do you see,” St. Isaac says, “how the Fathers interchange appellations for spiritual things?” And why, you may ask do they do this.  He goes on to explain:

“For the exactitude of designations holds valid for things here, while there is no perfect or true name whatever for things of the age to come, but a simple [state of] knowing only, surpassing every appellation, every rudimentary element, form, colour, shape, and compound name.”

Of course this causes problems for those of us raised and educated in the world of Einstein and matrix coding, a world in which we have been taught to quantify even the most intimate aspects of our experience. It seems we have come to believe that nothing really exists if it cannot be defined and reduced to numbers that can be compared to other numbers. The world of the spiritual Father is so far from us. It seems absurd to us to take the word of a holy man or woman about a matter that we ourselves have not personally seen, tasted or touched, that at least someone has not counted, defined and numbered.  It seems quite irresponsible, even foolish to us that we would take the word of a holy man or woman about a spiritual reality just because, well, just because they are holy and they themselves have known it. What make this even more difficult for us is the fact that the transfer of such knowledge is deeply personal. It cannot be objectified into words which, if transposed into a different context, will have the same meaning.

Holy people use different words to describe the same experience, words that will help the hearer, the specific one(s) that the holy person is speaking to. There is no attempt (because it would be impossible) to objectify the language. The goal is not analysis, but the goal is to help the hearer also enter the experience and him or herself to acquire the direct knowledge of the spiritual experience or reality that the holy person is speaking of.  St. Isaac puts it this way:

For this reason, once the soul’s knowledge is raised out of the visible world, the Fathers employ whatever appellations they please to indicate that [state of] knowing, since no one knows its name with exactness. But to make the soul’s deliberations steadfast therein, the Fathers resort to appellations and parables, according to Saint Dionysius, who writes, “we use parables, and syllables, and permissible names, and words, on account of our senses; but when our soul is moved by the operation of the Spirit toward those divine things, then both our senses and their operations are superfluous when the soul has become like unto the Godhead by an incomprehensible union, and is illuminated in her movements by the ray of the sublime Light.”

What does he mean?  He means that there are no right words, there are no definitions for this experience of knowing that which is “out of this visible world” because, as St. Isaac says, “no one knows its name with exactness.”  Nevertheless, “on account of the senses,” that is, because the saints are still in the body and still have mouths and minds and a reasoning faculty, because of this and in order to help others and to help themselves “remain steadfast” in what their souls are deliberating or knowing or thinking about as and after they have been “raised out of this visible world,” because of this very experience of illumination in the “sublime Light” and the soul’s transformation into the likeness of the the Godhead, because this happens while the saints are still in the body, they find that they are compelled in some contexts to talk about it. Some things they cannot speak of, as St. Paul tells us, there are “inexpressible words that are unlawful for a human being to utter.” However, there are some aspects of their spiritual experience that they can and apparently are compelled to talk about.

However, when they talk, they do not use words the way an engineer or scientist does. They use “parables and syllables,” that is, they use the tools of this visible world to try to point to the reality of the world unseen. It’s kind of like using a wrench to model and explain open heart surgery. It is clearly not the right tool, but if you grasp the intentions of your teacher and follow closely his or her motions and if you already have at least a little familiarity with the experience of surgery and the human anatomy, you might just learn something new. And whether the teacher is holding a wrench or a screwdriver in his hand as he does his demonstration really makes no difference whatsoever. The wrench is just a parable.  \It stands in for a reality that for whatever reason cannot be exactly represented. And this is also how it is with words when one is reading or listening to holy men and women speak of spiritual realities. The goal is not to understand the exact meaning of the words.  The goal is to experience, or at least begin to experience, the spiritual realities to which those words point.

So, the next time you are reading a holy Father and are baffled by his words, don’t fret yourself very much. The words point to realities that have, as St. Isaac says, “no perfect or true name.” Nevertheless, through prayer, inner quietness, and contemplation (which, by the way, may all refer to the same thing), through these and with longing and desire to know the realities to which our holy Fathers and Mothers point, it is possible (at least in some small ways) ourselves to have our souls “raised out of the visible world” and to be ourselves illuminated by a small ray of the divine Light.
Posted by Fr. Michael at 12:08 pm

Thank you, father, for your podcast and this blog. They have been most helpful to me along a very winding spiritual journey that is far from over.