While the tomb was sealed, You shone forth, O Life. While the doors were closed, You came to Your Disciples, O Christ God, renewing in us through them an upright spirit, according to the greatness of Your mercy, O Resurrection of all.
Dismissal Hymn for Thomas Sunday 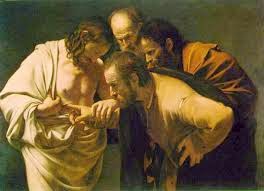 As I have sung this hymn over and over again for the past few days, I have begun to think about what it means for Christ to come to us through closed doors.  The disciples were in an upstairs room with the doors shut, the scripture says, “for fear of the Jews.”  Now since all of the disciples were Jews, probably it refers only to the Jewish leaders, their own leaders, the leaders of their people. They were afraid of their own leaders because the leaders had not, and in some places in the Gospels it says “could not,” see in Jesus of Nazareth what they had seen. But later on, many of these same leaders, would believe. In the ferment of the earliest days of the Church, after the Holy Spirit had come into the disciples and they had struggled through their first several weeks as a Christian community (not even yet called “Christians” but just “Followers of the Way”), once the Church had got going, then we are told that also “a great many of the priests were obedient to the faith.”

But at the very beginning, the Jewish leaders didn’t see, couldn’t see, what the disciples had seen. Consequently, the old persecuted the new. Those who had drunk the old wine could only say that the new wine was better. The old guard could not, at first, make room for something new.  John’s Gospel tells us that a big part of the reason why the old guard rejected Jesus was because they didn’t want the Romans to take away “their place and their nation.”  At first blush, this seems to be a selfish motivation; we read it individualistically, we read it as we ourselves perhaps would mean it if we were to say the same thing: “I don’t want to lose my place, I don’t want to lose my position of power and privilege.” However, it can be read a little more compassionately. The Jewish leaders knew very well that the uneasy peace between them and the Roman authorities could easily fall apart. There had been recent attempts at insurrection (Barabbas, who had been released instead of Jesus, was being held for murder committed during a recently attempted rebellion). And the Jewish leaders knew that the Romans would spare neither women nor children, nor distinguish between combatant and civilian. Jerusalem would be crushed if the Romans thought that rebellion of any sort was stirring.

The Jewish leaders—in their blindness, for sure—may have been sincerely looking to what they thought was the best and safest way to move forward to protect their people from the vicious Roman authority. As Caiaphas says, “it is expedient…that one should die…and not the whole nation perish.” After the fact, we find out that he is unintentionally prophesying, but at the time, he may have indeed been expressing sincere concern for the safety of the entire Jewish nation. And so, after the resurrection, like mad men trying frantically to stop one leak after another in the wall of a dyke, the Jewish leaders persecute the followers of Jesus, trying to save their nation from what they fear the Romans might do. And that’s why the disciples are hiding, they are hiding because of fear, and Christ comes to them.

As I have thought about my own spiritual journey in the light of this early Christian narrative, I have come to wonder if this story of misunderstanding and persecution of the new by the old doesn’t represent a common, even perennial Christian experience, maybe even a perennial human experience. The old guard just doesn’t see what the new kids see. And because those in authority have the ability to do so, they persecute or belittle or shun or just don’t take seriously the ideas, concerns and insights brought by the younger, the less educated or the socially less important.

Sure, it may be because those in positions of authority and power don’t want to let any of their authority go—I know that is what I have generally thought whenever I was the junior team member and I felt my voice wasn’t taken seriously. However, it may be that there is a kind of blindness, a kind of deafness, an inability to conceive of a different scenario without it suggesting danger to the health of the community or institution that those who are in charge feel responsible for. That is, those with authority may indeed have in mind what they sincerely think is best for the whole when they shut down and shut out the minority voice, the new kid on the block.

We don’t want to be hurt again. We are afraid we will be misunderstood again, we will be belittled and persecuted again. We don’t want to be told yet again to shut up because we don’t know what we are talking about. It hurts too much, and we are afraid it will happen again; so we close the doors, the doors to keep out the Jewish leaders (whomever they may represent in our lives). But when we shut the doors, we start to push everyone away because when we live in fear of being hurt, just about everyone can be a potential abuser.

But no door can keep out Jesus. No fear can keep Christ from coming and speaking peace to us. This is certainly one of the points John is making for us when he tells us this story. And yet it is one of the ironies of life that the persecuted is also sometimes a persecutor.

Now that I am an older man, a priest and a grandparent, now that I have almost a whole lifetime of experience and experiences to back me and often too, too settled opinions about life and how best to embrace it, now that I am often the one in authority, the one with responsibility, it seem that I regularly find myself in the position of the one who is feared, the one who misunderstands, the one who persecutes. I’m the Jewish leader that the disciples feared.

And whether I am actually fearsome or not matters little.  Those hiding in upper rooms out of fear only have to see that I look like or sound like or have the same position of authority as someone else who has hurt them in the past to keep their doors tightly shut against me. Someone, for example, who has a few bad experiences with teachers in elementary school will find it very difficult to trust and engage whole-heartedly any teacher for many years to come, perhaps for a lifetime. One bad experience with a religious leader or an overly zealous relative can cause a person to hide for the rest of his or her life in an upstairs room with all the doors shut anytime a priest or pastor comes near.

My wife’s paternal grandfather, for example, was quite a foul-mouthed man who hated anything to do with religion.  However, he loved his granddaughter, even though he regularly, and with the language of a sailor, lamented her religious inclinations. They loved to spend time together on weekends working around his avocado and citrus farm and doing art projects together. When she was a little girl, my wife asked her grandfather why he didn’t love God, and he told her this story:  When he was about 14 years old, he had to walk many miles somewhere and along the way a preacher offered him a ride on his buggy (automobiles hadn’t yet made it to California at that time). Once he got up with him on the buggy, the preacher went on and on about how sinful and wicked he was and how he need to repent and go to church. After a while, her young grandfather couldn’t take it any more and hopped off the buggy cursing the preacher and swearing that he would never be set foot in a church again. And he kept his word, not even for a wedding or funeral. The doors of his upstairs room were shut tight. He wasn’t going to let himself be verbally abused by a religionist again.

And here’s the question I keep asking myself: Can Christ even appear there, in my wife’s grandfather’s upper room, with the doors all shut from fear?  Can Christ come into the heart and mind of anyone who has been hurt, who is afraid, who has shut the doors tight for fear of being misunderstood, hurt and rejected again? Can Christ come to the fearful and the doubting and show them the wounds in his hands and side, and invite even the ones afraid, even the ones who don’t want to be deceived or lied to or hurt again, can Christ even invite these to touch and see and know that despite the fear, despite the misunderstanding and persecution and lies and even abuse, despite it all, Christ carries our wounds in His own body?

I think so. I think Christ comes even to those hiding in upstairs rooms and who shut the doors tight for fear of the religious leaders.

So what’s my takeaway? What have I realized through this refection on the dismissal hymn of Thomas Sunday? Two things: first, I am in the position of the Jewish leaders.  Even without realizing it, even thinking I am doing the right thing, doing my best to guard the faith and institutions entrusted to my care, I can be the one ignoring or belittling or even persecuting the disciples of the very One who has saved and called both them and me. Care is called for.  Gentleness is called for. Humility is called for.

Second, I have realized through this reflection that my friends and loved ones who seem completely locked up, who have been so hurt or offended or lied to or betrayed by religious leaders, so offended that they are mentally hiding in an upstairs room with the doors shut for fear of it happening again, that even these are not beyond the loving and peaceful power and presence of Christ. Those who doubt, those who fear, those who hide and shut the doors are not cut off from the One who appears in rooms with closed door, they are not hidden from the one who comes to those in fear, they are not beyond the touch of the One who invites those who doubt to touch and feel and see for themselves.

Thank you, Fr. Michael. These are beautiful, convicting and hopeful words. Thank you for your faithful postings. They are a blessing!

Fr. Michael, Thank you so much for the profound expression of compassionate humanity and godliness that your words represent.

thanks fr micheal for sharing a such a nice information.