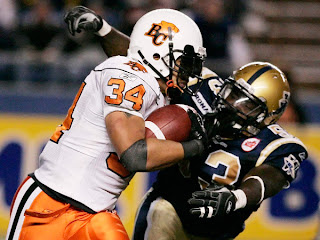 Some of you know that I am a football fan.  Our B.C. Lions won the Grey Cup last year and tonight they have a rematch with the Winnipeg Blue Bombers.  I don't get to go to many games because they are usually played on Saturday night and so conflict with Great Vespers.  However, today the game is on Friday.

The fellow I usually go with--who lives next to the Church and has season tickets--couldn't make this game so he gave his tickets away.  There is an interesting story here.  Serg, the neighbor, was out working in his yard one Saturday three years ago, when we first took possession of the church building.  I was doing maintenance around the church and saw he was wearing a B.C. Lions cap.  We struck up a conversation about football, and he offered to share his season tickets with me.  Since then, at the beginning of the season, I tell him which games I can make (usually only two or three), and he saves a ticket for me.  We've become friends--he calls me Father Mike--and we have even had a couple of serious conversations.

I've come to really enjoy Canadian Football, and even prefer it to NFL.  Certainly, the quality of play in the CFL is not at the same level as the NFL.  It's more like top level NCAA play.  However, the game is faster paced.  There are only three downs, much more passing (receivers can run toward the line before the snap giving them a big advantage receiving).  The end zone is twenty yards, making it easier for end zone catches.  And the tickets are reasonably priced.

I had to buy tickets on-line, so they cost more than I usually pay, but I got great seats: ten rows up on the 45 yard line.  Bonnie will be going with me tonight.  I am very excited about that.  I know she won't enjoy it as much as I do, but it is kind of her to want to be with me and at least be willing to share my excitement.  That's part of the reason why I spent a little more for good seats.  I want it to be as nice as possible for Bonnie.  When I'm with Serg, it doesn't matter.  We sit in the end zone with the rowdies and try to catch field goal kicks.

We are taking the train into the city.  Bonnie has never taken the train before, so she is excited about that.

Sorry for the decidedly unspiritual tone of this entry.  And yet, I don't know.  I think even in football love can shine, and even sitting next to a stranger cheering on your team, you can be kind and patient and even express a kind of rough, manly sort of gentleness.  Perhaps that doesn't make sense if you have never experienced it; but I have, so it makes sense to me.