The River of Fire: Is It Orthodox? 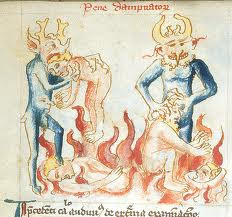 St. Cyprian: To Demetrian 24: “An ever-burning Gehenna and the punishment of being devoured by living flames will consume the condemned; nor will there be any way in which the tormented can ever have respite or be at an end. Souls along with their bodies will be preserved for suffering in unlimited agonies. . . . The grief at punishment will then be without the fruit of repentance; weeping will be useless, and prayer ineffectual. Too late will they believe in eternal punishment, who would not believe in eternal life.”

A friend wrote me recently, "I'm  curious to know if the view of hell as a 'river of fire' is patristic. This view certainly resonates with me but I've come across a lot of patristic writing that seems to have a very western view of it as punishment. Can you clarify this at all." This friend included the quote from St. Cyprian cited above along with quotations from seven additional major Orthodox Church Fathers of the third through seventh centuries.  For what it is worth, here is my response:

Dear Friend,
When we talk about the experience after death, we have to keep in mind that we are talking about mystery. Certainly, if one already has a western view of the judgement of the next life, one would read these quotations and see in them an affirmation of what he or she already thinks. However, there are other Fathers who say different things and these very Fathers that you have quoted say different things in other places. It is not merely a matter of the Fathers having different opinions on the matter of what the judgement after death is like (although sometimes that may indeed be the case). What is more fundamentally the issue here is that we are talking about mystery. It has not been revealed clearly to the Church what shall be. Words like "punishment," "retribution," "penalty," "recompense," "suffering in unlimited agonies," and "being devoured by living flames," these are not descriptions of what the afterlife of the ungodly** will be in the same way that one might describe what it is like to visit the Queen. There are words to describe exactly what it is like to visit the Queen, because visiting the Queen, while uncommon, is not a mystery. Heaven and gehenna and all that has to do with the age to come is a mystery, and in as much as we must use the words and concepts of this age to describe the experiences of the age to come, we are only providing metaphors and parables, we are only pointing toward a mystery that is spiritually apprehended (and then only darkly) in this age, but that will be known fully in the age to come. This is why the same Father in the Church might use many different (sometimes seemingly contradictory) metaphors to talk about the Last Judgement and the experience of the ungodly in the age to come.

The problem with the common western view of the suffering of the ungodly in hell is that it is part of the whole soteriological package of retributive justice. Hell is understood in this western scheme as a matter of satisfying God's justice through human suffering. If one already holds this view of God, then of course one would read the patristic passages you quote as buttressing their view of retributive punishment in hell. However, the Orthodox Church does not hold this view of God. In the Orthodox way of thinking, justice (which is certainly an attribute of God) is part of love and subservient to mercy: mercy triumphs over justice, St. James and several of the Prophets tell us. This, however, does not mean that the day of judgement will not be terrible. It will be terrible, in the old English sense: full of terror. The Liturgy does not call it the "fearsome day of Judgement" for no reason. And all of the terrible words and concepts that we can use from this age only begin to paint a picture of what that final reckoning will be.

I think some people, when they encounter the river of fire metaphor, when they encounter the Orthodox idea that the fire of gehenna is nothing other than the presence of God, they think that Orthodox Christians don't believe in a hell-like experience in the afterlife. This is a misconception. Just about all of the terrible things that can be and have been said about hell could in one way or another metaphorically and allegorically point toward the actual mystery of the judgement of the ungodly in the age to come.  However, we must keep in mind that any words in this life describing the age to come are metaphorical, not literal. And we must keep in mind that whatever suffering anyone experiences in the age to come is not to satisfy God (not God's justice, nor Gods plan, nor God's calling).  Sins have been forgiven. That's not the issue. The sins of the whole world have been forgiven at the Cross.

Using words (as metaphors) that I find helpful to explain the suffering of the ungodly in the age to come, I would say that the suffering of the ungodly will be due to their exposure to Reality—the Reality about God, the Reality about ourselves, the Reality about the life we have lived. And what is going to cause so much burning, so much pain, is that we will not be able to avoid it. We will not be able to pretend. And it will be eternal; that is, life on earth as we have known it will be over, and nothing at that point can be changed, nothing can be repented of. Which is why the call to repentance now is such Good News. It is the Gospel: Repent, for the Kingdom of Heaven is at hand! This is why we must confess our sins ("confess" in Greek is homolegeo which means 'to say the same thing' as God says about a matter: e.g. I confess that losing my temper is sin—which is also what God says about it, which is reality).

And as we live a life of repentance and confession, and as we are transformed to love with the fruit of the Holy Spirit, we come to actually live Christ's life. We begin to experience the judgement of God in prayer every day ("every morning I put to silence all of the wicked of the land" psalm 100/101: 8). The life of repentance and prayer is a life of self judgement ("judge yourselves lest you be judged," Jesus said). Those who take their Christian life seriously experience in this life a little bit of the age to come, a little bit of gehenna and a little bit of heaven. That's why the holy Fathers can speak of these things. But like St. Paul who said of his visit to the Third Heaven, that the words he heard there are "unutterable," so any experience of the age to come is unutterable in the language and concepts of this age. Nevertheless, love compels us to encourage and warn one another. The language of this age must be used, but only as a metaphor, as a pointer to what can only be known by direct experience.

** please note that I am using the word "ungodly" as a technical term referring to those who will experience the torment of gehenna in the age to come. I am intentionally not defining the term any further. Who the ungodly are in this life, I could not say. May God have mercy on all of us.
Posted by Fr. Michael at 12:03 pm