Martyrs All Around Me 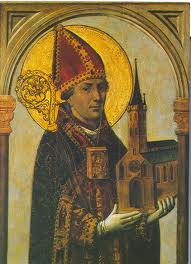 Bishop Ansgar (+865), called the apostle of the North, wanted to suffer for Christ from his youth, and he even had a vision in which he was promised that he would be a martyr. As time passed, the Apostle of the North worked and toiled for the spreading and defence of the Christian Faith all over northern Europe, but the expected martyrdom didn't come. Finally, Bishop Ansgar fell ill and felt he was going to die. Lying on his deathbed, he complained to his deacon, almost angrily, how Providence did not fulfill the promise that he would die a martyr's death. The deacon answered wisely that Bishop Ansgar had been a martyr his whole life and that his illness would be counted for martyrdom because, he said, a martyr is not only he who dies a violent death, but everyone who suffers through his lifetime for the sake of Christ and His righteousness.

Today is the feast of Sts. Ephraim and Isaac the Syrians. These holy saints are remembered in the Church primarily because of what they have written and how their writings have inspired those who through the centuries have read them. However, were it not for their writings, they probably would not be remembered as they are. This is particularly the case with St. Isaac who spent almost all of his adult life in solitary prayer. Many holy men and women who have lived lives as holy as Sts. Ephraim and Isaac the Syrians have gone unnoticed by the Church on earth (but not by God in heaven).

And solitary hermits are not the only saints who often go unnoticed on earth. There are also the everyday saints. These are holy ones who, as the deacon says above, suffer throughout their lifetime for the sake of Christ and His righteousness. I find it interesting that this wise deacon says Bishop Ansgar's illness would be counted for martyrdom. Doesn't just about everyone die of some sort of illness or accident? What distinguishes the illness of a nonbeliever or pagan or atheist from the deifying illness of a martyred saint?  Aren't they the same illness?

Yes, they may be the same illness, but what is different is how one bears the illness. I have often heard our Archbishop Joseph say that illness born without complaining is the same thing as martyrdom. What is different between an illness in a saint and an illness in anyone else is not the illness, but how it is borne. The suffering that produces nothing but suffering in one person can produce holiness and even godliness in another.

A Christian is not more or less likely to experience accident or disease than anyone else is. However, accident or disease in a Christian can become something much more than merely something painful to be endured. Accident and disease can become a martyrdom. In as much as we are entrusting ourselves to the God of Heaven, then the pain, sadness, infirmity and limitations we endure, we endure for His sake. In as much as we accept our suffering as something God has allowed (not caused, necessarily, but allowed, just as God allows human evil but does not cause it), then our suffering becomes an offering to God. We share in the sufferings of Christ and so are assured that we will share in Christ's resurrection.

Actually saints are all around us. Those who sacrifice themselves to raise children or care for the infirm, those who suffer with illness or handicap while trusting in God, those who pray in secret, and those who give away their wealth or time or labor without anyone knowing it:  All of these are saints--or at least potential saints, saints in the making--even if they don't make it into the Synaxarion.
Posted by Fr. Michael at 2:04 pm