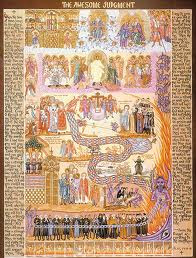 A couple of friends have asked me to comment on a post by Fr. Aiden Kimel on his eclectic orthodoxy blog entitled "What is Orthodox Hell?" It is, in my opinion, an excellent article naming one of the proverbial elephants in the Orthodox living room. Namely, it has become common in the last half century or so in many Orthodox Christian circles to refer to a particular way of talking about hell as the Orthodox teaching on the matter. However, this is clearly not the case.

The hell-is-heaven-experienced-differently explanation of hell is actually a minority opinion--if we are just looking at the numbers. The majority of significant Orthodox writers throughout history have spoken of hell in much more painfully tactile and even retributive terms. Fr. Aiden quotes two long passages from St. John Chrysostom to drive his point home. St. John's description of the torment of hell is nothing less than frightening, and taken by itself it could paint a picture of God as vindictive and cruel. But Orthodox Christians do not take it by itself.

That's an important point: any depiction of hell must be understood within a wider cultural and theological context. More specifically, I mean that if one holds the retributive justice philosophy that undergirds the substitutionary atonement soteriology of many contemporary Christians, St. John's words will indeed be interpreted as describing the retribution of God through the eternal, inescapable punishing torture of human beings.   However, such a soteriology in Orthodoxy is a (very small) minority opinion. The majority of Orthodox writers speak about salvation in very different terms.

[I am purposely avoiding the word "model," as if the Father's envisioned distinct models of salvation--rather I view these different ways of speaking as just that: different and equally acceptable metaphors to speak of a known yet ineffable spiritual reality.]

And if the means of our salvation is an ineffable reality, certainly the nature of the afterlife, whether we speak of heaven or hell, is also ineffable. Nevertheless, within the Orthodox Tradition certain language, certain metaphors are common when the Fathers speak of hell, even though some are apparently contradictory. Why might that be?  I have a theory--and it is just that, a guess.

Perhaps in St. John Chrysostom's world, a world just beginning to be christianized (and in many similar contexts throughout history), the pagan concepts of the afterlife made vivid imagery of suffering and retribution a suitable metaphor for the ineffable reality of those who in the age to come are "shut out of the bridal chamber." And perhaps, in a world of extreme material/spiritual dualism, a hell-is-heaven-experienced-differently is a more meaningful metaphor than the fire and brimstone image for the same ineffable reality.

I can hear some of my readers screaming: "But which one is true?"

They are, in my opinion, both true and both false. They both point to an ineffable reality, a real, true reality that cannot be reduced to concepts and words.  It is a reality that can be known and experienced even in this life, but it is a reality that cannot be squeezed into any particular concept, metaphor or vocabulary of this age. It is just like St. Paul's experience of the "third heaven" where he heard words that are "unlawful" for a human being to utter. Heaven and hell are mysteries: they are known realities that in this age can only be hinted at, pointed towards or suggested in parables and metaphors, some of which may even appear contradictory.

In an on-line conversation about Fr. Thomas Hopko's Ancient Faith Radio podcasts about the wrath of God, Fr. Aiden makes the following comment which seems to me to put excellent perspective into this whole matter.  He writes:

I very much appreciate Fr Thomas’s effort to salvage the wrath of God. One of my concerns about Kalomiros’s “River of Fire” is its virtual nullification of the divine wrath, thus making it impossible for pastors to preach huge portions of the Holy Scriptures, both Old Testament and New Testaments. Clearly the divine wrath poses a difficulty for us, but it is a difficulty that is posed to us by the Word of God. Fr Thomas reminds us that we should not too quickly retreat to abstraction, but rather we need to dwell in the biblical story and allow the Scriptures to teach us the meaning of the divine love and wrath. We may end with St Isaac of Syria but perhaps we should not begin with him.

It's the last line the really speaks to this matter. St. Isaac of Syria may indeed offer the quintessential Orthodox Christian expression of the mystery of heaven and hell, but we should not rush in our minds too quickly there. It may do us good to struggle through the violent metaphors and frightening language of the Bible and many of the Church Fathers. St. Isaac spent decades in ascetic prayer to see things the way he does and to discover the metaphors that he offers. As is often the case in our spiritual life, process here may be more important than product.

But if the process is too frightening for we weak ones, at least let us hold both images for a while, one in each hand, and feel the discomfort of trying to imagine what is unimaginable. Let us learn to love and trust in God, even when we don't understand--which, in my experience, is often the beginning of understanding.
Posted by Fr. Michael at 9:12 pm

A thoughtful and irenic article. Thank you for not consigning me to the outer or inner levels of hell. :)

Needless to say, my opinions are precisely my opinions, and no one should think that I am speaking for the Orthodox Church.

After emailing you again on this subject I see this post here- and this helps me even more.
It better answers my question, "If St Isaac speaks strongly about one understanding of God's wrath and punishment to the exclusion of other, retributive, understandings, why should we restrain from a similar boldness?"
I think it *is* good for me to sit with the dissonance a bit. It requires more humility and love for others who are different, and makes room for all the Scriptures give us.

I have wondered about St John's words. I like your theory. I have wondered also, just how different such words must sound to us, coloured by all the ugly, retributive imagery of hell that we have inherited in our culture. Today such language would do little but turn people away in disgust (or make hyper-religious monsters of a very few who *knew* they weren't going to hell themselves!).
But I can see if this language were not so coloured by long misunderstanding, then St John's words could be a sobering and helpful word to his city parishioners. If those who heard such things were seeped in an Orthodox understanding of God's love, then such rebukes could inspire contrition and repentance rather than threaten to poison our hope and faith in God's love, kindness, gentleness, etc.

Thanks for your thoughts.
Love;
-Mark Basil

Thank you Fr. Aidan, for inviting us to think more deeply about matters that we would rather keep in a safe box somewhere in our minds.