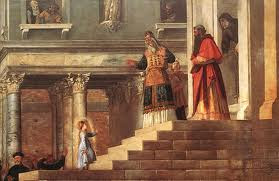 The following are two answers to questions about Mary the Theotokos. I wrote these to an inquirer recently.

Let me try to answer your questions about Mary. First, about Mary and Original Sin. The Roman Catholics have a doctrine (teaching) that Mary was conceived in the womb of St. Anna without Original Sin. This is a new teaching and was only made official about 150 years ago. The Orthodox do not have this teaching. The Orthodox Church teaches that Mary was conceived and born just like everyone else. However, her parents were very holy people and Mary was a very holy person who from age three was dedicated to God and reared in the Temple by the Prophetess Anna (and others). And, at least for a time, she dwelt in the Holy of Holies surviving on manna brought to her by the Archangel Gabriel. Mary became as holy and full of the Holy Spirit as was possible under the Old Covenant. She experienced the effects of sin, but the Fathers of the Church are not quite in unison on whether or not she ever actually committed any personal sins—most say she never willingly sinned. So it was this holy woman (probably about age 15) who became the Mother of God. In a sense, the whole Old Testament, all of God's covenants with Adam, Noah, Abraham, Moses and if there were any others, all the prophets, and all of the trials and tribulations of Israel existed to produce a race of people who could produce a woman who could bear God in her womb.

Second, why do we call Mary Mediatrix? We call Mary Mediatrix (female form of mediator) because from the human side, She was the one who wholly said yes to God. She is the one who made it possible, from the human side, for God to become man in her womb. Thus she represented the entire human race, or she was between God and the entire human race; and being the one between makes her a Mediatrix (literally, the one who goes between). Furthermore, we call her Mediatrix because as God's Mother, she intercedes for us. She has "a mother's boldness" before God in intercession.