Mary In The Temple 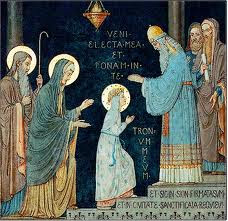 Many, I chief among them, have had trouble accepting the historicity of the Church's accounts of Mary as a child in the temple--especially in the Holy of Holies. And I think we need to make clear from the beginning that regardless of the historicity of the accounts, the spiritual or symbolic meaning of the accounts is what is most important. That is, Mary being raised in the Temple of God means that in Mary is fulfilled all of the worship of the Old Covenant. Coming from the Temple of God, Mary becomes most literally the New Temple of God, the type of the Church, which is the Temple of God. Being in the Holy of Holies and fed manna by an angel means that in her is fulfilled all of the holiness of the Old Covenant, and in her is epitomized all of the acts of God to save His people and bring about the Incarnation of God.

Nevertheless, given that the spiritual meaning of the stories about Mary's childhood are most important, still we can ask the historical question: "Was it possible that Mary, a girl, could be raised in the temple and could even dwell in the Holy of Holies?" Actually, several years ago I looked into this matter from a historical point of view. What I found is not proof one way or another. What I found was that most of the reasons why I thought it was impossible for a girl to be raised in the temple are not historically solid.

My problem was that I was taking Old Testament references to how temple worship was supposed to be conducted and imagining that they reflected the temple practice at the time of Mary's youth.  That is, I imagined that worship in the temple at and before the time of Jesus was carried out according to the Laws we read in the Pentateuch. Historically, however, this was not likely the case. The first Temple, Solomon's temple, was destroyed 587 BC. In 538 BC, a new temple was begun and completed about 515 BC. This is called Zerubbabel's Temple. However, this temple was defiled and plundered in 167 BC by Antiochus the IV (beginning the Maccabean Wars). The temple was again defiled by Pompey in 63 BC. Crassus, in 54 BC, then completely plundered it. And Herod in 37 BC, as he was conquering Jerusalem, virtually destroyed it. After eighteen years of rule (20 or 19 BC), Herod caused the temple to be rebuilt. Thus, this third temple is called Herod's Temple.

Although Josephus claims that the main part of the temple was built in only a year and a half, other (and perhaps more reliable) extra-biblical sources claim Herod's Temple was not complete until as late as 60 AD. [See The International Standard Bible Encyclopedia, Vol 4, p.770 (Eerdmans, 1988) for a discussion of the sources]. However, biblically, the Jews themselves are recorded as saying to Jesus, "It took 46 years to build this temple" (John 2:20).

So what's my point? My point is that the Temple that Mary entered (about 20 to 12 BC) was just in the early years of its construction. It may not have been officially consecrated yet. The laws for temple worship as we read them in the Pentateuch may not have been functioning yet--and this is a key point: they may have never functioned in Herod's Temple or fully in any of the three temples. We know from both the biblical and extra-biblical history of Israel that many, many violations of the Mosaic Law took place (e.g. the jubilee was never carried out, and at least once the Law of Moses itself was completely lost and had to be "discovered"). Further, we know from Luke's Gospel that there were women in the temple at the time of Jesus' birth. Luke says of the Prophetess Anna, that she lived "day and night" in the temple.

None of this proves that Mary was reared in the temple nor that she dwelt in the Holy of Holies. However, I think the history of the matter shows that it was not entirely impossible. But like I say above, the most important aspect of these childhood stories about Mary is not their historicity, but their spiritual and symbolic meaning. Nevertheless, those who do believe in the basic historicity of these stories are not completely off their historical rocker.
Posted by Fr. Michael at 12:38 pm

Thank you for this post. I was aware that Herod's temple had been under construction for quite some time during Jesus' lifetime, and possibly wasn't finished until shortly before it was destroyed by the Romans, but I hadn't thought to connect the beginning of the renovations to the time of Mary's birth. I'll have to look into that.

That being said, there are a few other issues here:

First, I don't have a problem with the idea that women such as Anna the Prophetess lived in the Temple, on some level; the question is whether they would have been allowed past the Court of the Women. Given the riot that began (admittedly, several decades later) when Paul was accused of bringing one of his Greek friends past the Court of the Gentiles, and given how seriously we Orthodox take gender boundaries when it comes to the altar etc., and given the debates that exist among rabbis to this day regarding whether men ought to be allowed on the Temple mount even though there hasn't been a Holy of Holies there in almost 2,000 years, I think the burden of proof rests on those who think that the Jews would have let those boundaries go simply because the Temple was being renovated.

Second, and perhaps more importantly, where there is ambiguity at best about the historical record, I think we need to be careful to acknowledge that ambiguity, because to speak as though all of the legends in our liturgy are a matter of historical or scientific fact is to set up a stumbling block for those who have an interest in history and science. I know that I could not be Orthodox if I thought I was required to believe that pelicans really do feed their blood to their young, or that dragons really existed, for example, and I know that my own journey to Orthodoxy was jeopardized, at points, by encounters with Orthodox people (none at either of our churches, I'm happy to say!) who insisted on a more literal reading of those traditions. So, as with those traditions, so with certain others.

I do appreciate your engaging with these issues, though. And, like I say, you have piqued my curiosity about the history of the Temple under Herod, etc. I shall definitely give this some more thought.

Dear Peter,
I, too, am not keen on pressing as history some of the tales the Church tells about itself. As I said, the more important matter is what these tales mean, what the Church is saying through them.